This is our edition of Devises et emblemes of 1691 by Daniel de la Feuille. In this introduction, we have limited ourselves to the essentials.

Daniel de la Feuille was born around 1640 in Sédan (the Ardennes), where he was trained to be a watchmaker.1 In 1663 he married Charlotte Marlet, the daughter of a local carpenter. The couple had seven children. In 1683, De la Feuille and his family fled to Amsterdam to escape the French oppression of the Huegenots. In the same year he was granted the status of 'poorter' (citizen). In Amsterdam, he worked as an etcher and art dealer. In 1691, he was accepted in the booksellers' guild; it is suggested Devises et emblemes (also 1691) should be looked upon as De la Feuille’s masterpiece. It is noteworthy that most of the emblems in the Devises et emblemes have the shape and size of a watch; this may make the emblems them especially useful for watchmakers and other craftsmen. De la Feuille died in 1709.

About the Devises et emblemes

During his life, De la Feuille published about twenty books (collections of emblems, devices, coats of arms and medaillons), and commemorative poems. The illustrated volumes were the most succesful. After his death, as late as 1782 an anthology of his work, titled Nieuw and nuttig boek voor alle kunstenaars, vervattende vier A.B.C. van cijfers van Loofwerk met zinspreuken, zinnebeelden enz., was published in Dutch, for the market of artists in search for ideas and inspiration in the emblematic tradition.2.

In 1691, De la Feuille himself had published a similar anthology of emblematic imagery, Devises et emblemes anciennes et modernes, tirées des plus celebres auteurs. Remainders of this first edition seem to have been republished in 1692, 1693, 1697 and 1712. A handwritten correction on the titlepage indicates that in these cases only the first page is altered.3 There were also German editions of Devises et emblemes published in 1693, 1697, 1702 and 1704.4 The German editions only have Latin, French, Italian and German mottoes. The original picturae of the Dutch edition have been replaced by picturaes that seem to be of a higher quality. The difference is very clear when we compare a German example and its Dutch equivalent. 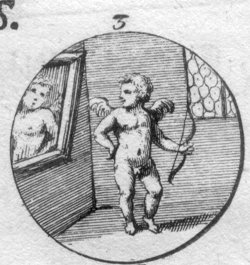 a German picture and 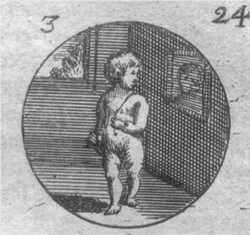 The German images show more details, and are all made by the same engraver. An electronic version of one of these German editions is available at De la Feuille, Devises Et Emblemes 1697 [web]

The EPU-edition is based on the Dutch 1691-edition, published in Amsterdam. In all of the known Dutch impressions and editions of Devises et emblemes the 51 pages of picturae are accompanied by explanations in French (in this edition referred to as 'title') and mottoes in seven languages (French, Latin, Italian, Spanish, Dutch, English and German). The titlepage announces this variety by showing emblems with mottoes in each of the seven languages. In the book itself, some of the emblems have only five or six mottoes. These omissions are marked in our edition. The emblems are followed by an announcement ('Avertissement' Avertissement), in which another volume of collected emblems ('Une Seconde Partie d'un Livre de Chiffres') is promissed. In this 'Avertissement' Henri Offelen, 'Professeur en toutes ces Langues à Amsterdam', is identified as the author of the multilangual mottoes in the Devises et emblemes. This notification has caused some confusion concerning the actual composer of the Devises et emblemes, with both Praz and Landwehr chosing to refer to the title, rather than the author in their bibliography.

At first glance, the Devises et emblemes appears to be in visual unity. However, research has shown that a number of engravers must have been working on the illustrations. Every fourth page has a different number of emblems, fifteen being the regular, and twelve the irregular number, and a different style of engraving. Praz and Landwehr have already established the origin of the images shown on these pages. They were derived from Saavedra Fajardo’s Idea de un príncipe político christiano (1655). 5 These similarities between De la Feuille and Saavedra have been encoded in this edition. However, it is possible that some of the pages with fifteen emblems were derived from another book by Saavedra (more research is needed in this area). These fifteen pages can be divided into three separate 'hands of illustrating. Comparing these emblems with illustrations in De la Feuille’s Nieuw and nuttig boek voor alle kunstenaars, you notice that almost all pages in this book are signed with 'la Feuille fecit'. This shows us that a number of emblems in the Devises et emblemes can be ascribed to De la Feuille. Further research will have to be done to clarify who else was working with him, or for him. Here are two examples of signed work by De la Feuille: 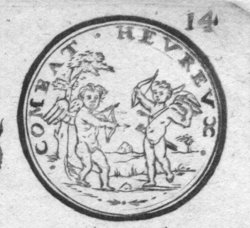 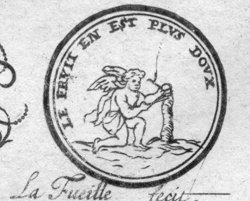 In some cases, as on the Saavedra-pages, De la Feuillea’s anthology is organised according to the sources that are used. Page 36 for instance, originates from Alciato’s Emblematum liber. These emblems are made by a single hand that is not found anywhere else in the book. The majority of the emblems taken from Vaeniu’s Amorum emblemata are grouped together on the last ten pages of the Devises et emblemes. There also seems to be, irregularity in the way De la Feuille transferred his sources. So far, we have marked the connections with Paradin’s Princeliicke Deviisen, Heinsius’s Emblemata amatoria, Alciato’s Emblematum liber, Roemer Visscher’s Sinnepoppen and Rollenhagen’s Nucleus emblematum selectissimorum. In these cases, De la Feuille seems to have based himself on Livre curieux et utile pour les sçavans et artistes (Paris, 1685) by Nicolas Verien. The first part of this book, consisting of 53 pages with fifteen emblems each, shows great similarity with the order and content found in De la Feuille.6

Clearly, the Devises et emblemes was presented as the ultimate collection of the most well known examples of the European emblem books. This book can therefore be seen and used as a touchstone of the sixteenth and seventeenth century emblematic tradition. 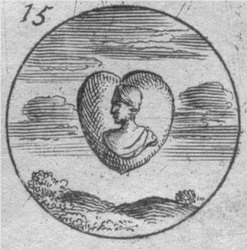 Although a personal touch could be hidden in the selection - is the last emblem for instance, meant as a personal farewell to the reader? But it seems reasonable to assume that De la Feuille intended to present the most popular emblems and devices of his time. Since the Devises et emblemes originally did not contain an index, was not organised in a strictly thematical way, and lacks subscriptio’s to clarify the meaning of the images, it is questionable if the book was ever perceived as an useful anthology of emblematic material. Did the seventeenth and eighteenth century readers perhaps see ways to use the Devises et emblemes that we tend to overlook?

Copy Used For This Edition

In making this edition of Emblemata amatoria we used the copy of the 1691 edition, conserved in the library of the Faculty of Arts at Utrecht University, shelf number LB-KUN: RAR LMY DEVISES 1 (Amsterdam, 1691).

Despite limitations of time and resources, we did manage to make a brief comparison between the Utrecht copy and other extant copies of the book. It is clear the Utrecht copy shows no defects, and is very similar to the one described in Landwehr, Emblem and Fable Books

We have transcribed the full text from the Utrecht copy and encoded it using TEI markup; TEI allows for flexibility in presentation and non-destructive editorial enhancement of the text. The full project guidelines for transcription, editiorial intervention and indexing of the text are available elsewhere on this site.

We have added normalisations of spacing and interpunction, always allowing the viewer the option to see either the normalised or the original text. The viewer may choose between the original and the re-spelled text (using the 'Preferences' option on the menu). In each emblem we also point to some literature. Again, this is something we are still working on.

The full Emblem Project Utrecht bibliography may be accessed using the menu option at the left side of this (or any) window. A selection of literature relevant to De la Feuille and his Devises et emblemes follows.

1
This brief sketch of De la Feuille’s life and literary achievements is based on Obreen, Notes

2
Earlier editions of this book date from 1697 and 1732, see for instance De la Feuille, Nieuw and nuttig boek

3
The copy we used for this edition shows 1691 on the titlepage. The information on the printing history of the Devises et emblemes is based on Landwehr, Emblem and Fable Books