Introduction
Concordance
All Picturae (This Book)
All Facsimile Images (This Book)
About Daniël Heinsius
About the Ambacht van Cupido
Copy Used for this Edition
Transcription
Literature
Notes
Content: Titlepage →

This is our edition of the 1613-edition of Ambacht van Cupido by Daniel Heinsius. In this introduction, we have limited ourselves to the essentials1.

Daniël Heinsius was born in Ghent, a town in the southern Netherlands, in 1580.2 He lived there for only three years. His parents then fled from the Spanish Inquisition, and Heinsius was consequently raised and educated in the northern Republic. After his studies at the Franeker and Leiden universities (where his father wanted him to study law, while Heinsius himself was devoted to the classical literature and philosophy), Heinsius started working as a classicist in Leiden. As a professor, he edited many Latin and Greek works and composed Latin and Dutch poetry, almost right up to his death in 1655.

About the Ambacht van Cupido

First published in 1613 as sequal to Heinsius's Emblemata amatoria, the Ambacht van Cupido (The trade of Cupid) was reprinted in 1615, 1616 and 1619, as part of an enlarged edition of Emblemata amatoria. A number of undated editions survived as well.3 For the edition of 1613 an unknown artist made new, oval picturae for Heinsius's first set of love emblems (allready printed in 1601 and 1608 and then titled Quaeris quid sit amor (see: [Titlepage]) and Emblemata amatoria (see: [Titlepage])). The picturae for the new collection named 'Ambacht van Cupido' resemble the style of Vaenius's Amorum emblemata, in the sense that they are also set in an oval shaped frame. The 1613-plates were again used for the 1615-edition; by this time, the plates seem worn out. The engravings of the 1615-edition are of poor quality, and this could have been the reason the a new set of plates was made for the 1616-edition.

The Nederduitsche poemata, allthough reprinted only two or three times (in 1618 and 1621), had an enormuous influence on the development of Dutch literature. With the preface to the Quaeris quid sit amor? Heinsius had introduced the love emblem in the Netherlands (and Europe), but he also introduced another innovation, one that would have an impact outside the genre as well. In addressing the Aen de Joncvrouwen van Hollandt ("Maidens of Holland") Heinsius described in 1601 how Venus came to prosperous Holland in order to ask the poet to teach her son Dutch:

[Venus herself this year (not long ago this was)
Came full of glad good cheer to Holland's prosperous towns.
Where'er she walked or stood, her lovely golden hair
Left scatterings of silver dewdrops here and there.
She came with a request, she said: that her young son
Could spend some time with me to learn our Holland tongue.

In this preface Heinsius justified the existence of Dutch-language poetry. Around 1600 it was taken for granted that he, as poeta doctus, would choose to express himself in (Neo-)Latin. By then opting for Dutch he became the emancipator of the Dutch language. He evidently felt some hesitation, however, for Quaeris quid sit amor? appeared in 1601 under a pseudonym. This can perhaps be explained by the subject matter of the volume, but the choice for the vernacular may have played a role as well. However that may be, by 1613 Heinsius had lost his timidity. In the Ambacht van Cupido, Heinsius did more than justify the existence of Dutch love emblems. Emblem In lubrico. [20] shows Cupid on ice-skates: 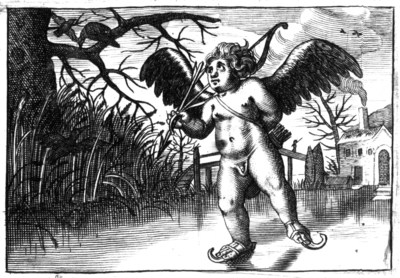 with the following text as the subscriptio:

Cupid learns the game invented here in Holland,
He tries to walk on ice, he wears a pair of skates.
He's tied onto his feet the two sharp iron blades -
They'll keep him firm, he thinks, and steady on the water.
The ice is slippery, the blade against it, too,
It's easy to fall down, or even right straight through.
With wooing it's the same: those lacking well-honed skill
Will lose their footing fast, their love will come to nil.

Heinsius now claims that Cupid, during his stay in Holland, learned more than just the Dutch language. In passing, the god of love also mastered the skill of ice-skating. The Netherlanders - inventors of the "skating game" - taught him how to skate on their frozen canals. In the pictura we see a Dutch winter landscape and the typical wooden skates of the Low Countries. In gaining mastery over the slippery ice, this emblem suggests, Cupid also learned the fine points of the art of love. The situation in love is no different from that on the ice. Like skating, the game of love seems deceptively simple, but can only be learned by trial and error - by falling, getting up and trying again. Now that Cupid has learned from the Dutch experts how to stay on his feet on the ice, he can be considered truly accomplished in the art of love. Heinsius may have employed this positive image of the energetic, skilled Dutchman to counter the idea current elsewhere in Europe that in the cold, wet climate of the Netherlands only people of a crude, unrefined sort could thrive. The point here would then be that only in the Netherlands did Cupid truly learn the fine art of loving. By 1613, in Het ambacht van Cupido, Heinsius could speak with authority. With the addition of the 24 emblems of the Ambacht van Cupido to his collection of love emblems, Heinsius also went a step further in the realistic settings against which Cupid performs. The little god of love is pictured besides windmills, he skates on little Dutch canals, and he plays typical Dutch games.

Copy Used for this Edition

The full text has been transcribed and encoded using TEI mark-up, to allow for flexibility in presentation and non-destructive editorial enhancement of the text. The full project guidelines for transcription, editorial intervention and indexing of the text are available elsewhere on this site.

The full Emblem Project Utrecht bibliography may be accessed using the top menu of this window. A selection of literature relevant to the Ambacht van Cupido follows here.

3
This brief sketch of the printing history of the Ambacht van Cupido is based on Becker-Cantarino, Einleitung [to Heinsius's Nederduytsche poemata]

and Landwehr, Emblem and Fable Books