This is our edition of Zegepraal der goddelyke liefde by Jan van Hoogstraten. In this introduction, we have limited ourselves to the essentials.

Jan van Hoogstraten was born in 1662 in Rotterdam.1 A number of portraits of Hoogstraten were made during his lifetime.2; the one shown here is made by J. Wandelaar and A. van Buyssen. 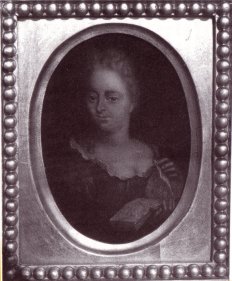 Hoogstraten worked as a bookseller in Dordrecht and Gouda. At the same time he operated as 'commies ter recherche', collecting taxes; a profession that he also practised in Gouda, Tiel, Zaltbommel and Rotterdam. It seems that his marriage with Geertuy van der Hagen did not provide him much joy. The two lived their lives separately, both having their own affairs. In 1736 Van Hoogstraten died in his birthplace.

The printer Lucas Kloppenburg delivered to separate editions of the Zegepraal der goddelyke liefde, in 1709 and 1710. On the title-page of the 1710 edition he stated: 'De Tweede Druk, merkelyk vermeerderd en verbeterd' ('second edition, notably improved and enlarged'). In fact though, not much was changed in this second edition. Kloppenburg corrected some printing errors, but did not change the texts or images. The printer Ratelband, who published a third and fourth edition of Zegepraal der goddelyke liefde in 1728 and 1737, repeated Kloppenburg's statement also without making any changes. There are therefore no major differences between the four editions of Hoogstraten's emblem book.3

Hoogstraten was inspired by emblem books made by Jesuits in the early twenties of the seventeenth century. A number of his emblems are directly linked to Van Leuvens Amoris divini et humani antipathia, see [Titlepage], Herman Hugo's Pia desideria, see for a Dutch translation of this embleem book [Titlepage] and Typus mundi, see [Titlepage].

The most extraordinary feature of the Zegepraal der goddelyke liefde is its mixed content of texts, pictures and music. The subscriptio's of all 47 emblems can be read (in silence or aloud), but they also contain an instruction for the singers. Hoogstraten used well known tunes - a common practice among Dutch songwriters - for his lyrics. The tunes almost all to belong to the vast corpus of popular songs of the seventeenth century.4 Just above the first line of poetry, references to the original songs indicate how Hoogstraten's text can be sung.

Another striking characteristic of the Zegepraal der goddelyke liefde is its personal touch. The book is dedicated to [Dedication], a friend of Hoogstraten who was, according to Hoogstraten, known for his 'zugt tot kunst en deugd' (his interest in art and vices). A few of poems dedicated to a number of anonymous female friends of Hoogstraten as well as his minister, Sebastiaan Borstius, conclude the emblem book. In the midst of the occasional poetry, one also finds some poems of a more meditative nature. One of them, titled Meystorm, seems, through its motto ('Wie ziet dog in dit Leven iet?/Het is een Droom, en anders niet' ('Who would be able to look at anything at all in life? Life is a dream, and nothing else')) to remind the reader of Luykens poem 'Air' in the Negende Verdeeling. [9] of his Duytse lier.

Copy Used for This Edition

In making this edition of Zegepraal der goddelyke liefde we have used the copy of the edition of 1709 conserved in the Royal Library (The Hague), shelf number 1350 G 61. A number of pages (three in total (p. 76, 86 and 193), due to the fact that The Hague copy shows some defects) have been scanned from another copy of the 1709 edition, conserved by the Library of the Utrecht University, shelf number LBKUN RAR LMY HOOGSTRATEN, J 1.

We have transcribed the full text from the The Hague copy and encoded this text using TEI mark-up, to allow for flexibility in presentation and non-destructive editorial enhancement of the text. The full Project Guidelines for transcription, editorial intervention and indexing of the text are available elsewhere on this site.

The full Emblem Project Utrecht bibliography may be accessed using the menu option at the left side of this (or any) window. A selection of literature relevant to Zegepraal der goddelyke liefde follows here.

1
This brief sketch of Hoogstraten's life is based on Groenenboom-Draai, De schele droes op drift

.
2
More portraits can be found in Roscam, Van Hoogstraten

3
This printing history is based on Daly, Jesuit Series